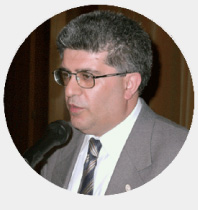 How I use New Pyonex,
Clinical Application of New Pyonex

Along with the increasing growth and diffusion of auricular acupuncture, new ways of auricular stimulation have appeared. Particularly important is the continuous stimulation between treatments. This new method is applied between one session and the next, and it optimizes treatment out come and reduces the number of treatments required. Among the various forms of stimulation most effecive are metal beads, vaccariae seeds, and semi-permanent auricular needles. The New Pyonex belongs to the last category. Thanks to the adhesive patch being included, they are very easy to handle, easy to apply and easy remove. Patients should stimulate New Pyonex several times a week with gentle contact of fingers to avoid the loss of the effect due to the habituation of receptors, The exceptional adhesion and resilience of the New Pyonex makes it possible for it to be attached on the ear’s surface for various time periods - from a few days to two or three weeks or more.

One feature of the New Pyonex that makes it particulary effective for long-term theapy is the option of using different needle lenghs (0.3 mm Orange, 0.6 Yellow, 0.9 Green, 1.2 Blue, 1.5 Pink). This allows the treatment to be customized according to the auricular point and to the therapeutic action desired, as well as the sensitivity of the patient. For example, using New Pyonex could be particularly useful in children and more generally in patients who are intimidated by needles, because the invasiveness of New Pyonex is almost nothing.

The application of New Pyonex allows the stimulus to be modulated - more or less strong in relation to the therapeutic action desired and the point treated. In the model proposed by our school, auricular points are divided in neuro-reflex points and functional points. Neuro-reflex points appear at the activation of pain’s receptors. In long-term therapy, stimulation of these points must be strong, so they require New Pyonex Blue (1.2mm) and Pink (1.5 mm). Functional points have no correspondance with any particular structure of the body. They are points for general rebalancing and symptom relief and they affect specific functions of the body. These points must be stimulated with New Pyonex Orange (0.3 mm) and Yellow (0.6 mm). The New Pyonex Green (0.9mm) can be considered as “jolly” points, because they can be used on functional points when the stimulus of orange and yellow New Pyonex is too weak. Furthermore they can be used on neuro-reflex points when the stimulus of blue and pink New Pyonex is annoying or painful for the patient.

Now I will introduce three original New Pyonex applications developed by our School.

The application of New Pyonex has proven to be extremely effective in auricular chronostimulation. As already stated, patients stimulate the acupoints several times during the day, with slight pressure of a finger. This auricular chronostimulation consists of well defined self-stimulation according to a precise time sequence. When the stimulation is sequential in the correct time sequence, it optimizes the therapeutic effects of auricular acupuncture. Each auricular point has a specific therapeutic action that becomes more effective by following the circadian rhythms. The patient stimulates acupoints at specific times of the day according to the instructions provided by the therapist. This task can also be carried out with special technology, for example thanks to a particular App (application: microsoftware for mobile devices, smartphones and tablets) indicates to the patient the precise time of stimulation, its duration and the auricular points to stimulate. 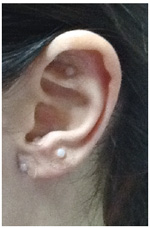 In this method of alternating stimulation (alternating right and left) patients stimulate Pyonex (orange and yellow) with slight pressure. In this method, Pyonex are placed in two bilateral auricular points. The stimulation lasts about 3 minutes with a frequency of 30 “hits” finger to needle every minute. The main basis and rationale for this method is EMDR (Eye Movement Desensititization and Reprocessing). This technique created by Francine Shapiro, origianlly consisted only of alternating (left to right) eye movements. Later alternating tactile, visual and sound stimuli were added. EMDR improves communication between the two cerebral hemispheres, and re-establishes excitatory/inhibitory balance, which was previously disrupted.
From our experience, we have applied alternating auricular stimulation to improve the stress response and prevent substance abuse, anxiety and related disorders.